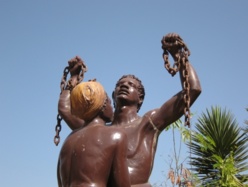 The abhorrent slave auction aired by CNN continues to ignite condemnation worldwide while drawing attention to the plight of thousands of black slaves who are being sold in markets in the Tindouf-run Polisario camps and in Mauritania.

If slavery in Libya is a fallout of the state-collapse and the erosion of the rule of law, which offered propitious conditions for the surge of human trafficking networks, slavery in Tindouf camps and in Mauritania is an institutionalized practice that goes on as a relic of an archaic tribal system.

In Tindouf camps, where the separatist Polisario militia and their mentor Algeria impose a media blackout, the suffering of black Sahrawis made it to the international stage after two Australian journalists secretly documented the slavery practice in the camps in their 2009 documentary Stolen.

Human Rights Watch and other human rights watchdogs have on multiple occasions alerted in their reports to the continuing slavery in the camps where slave masters are given official documents attesting to their ownership of other human beings in a territory where Algeria seems to have relegated its prerogatives to a separatist militia.

In Mauritania, slavery is practiced on a larger scale. The West African country was the last country to abolish slavery in 1981, although it did not make it a crime until 2007. Yet abolishment is not synonymous with elimination.

Mauritanian authorities persist on maintaining a blackout on the practice of slavery in the country by denying access to international civil rights organizations, the latest of which is a US anti-slavery delegation that planned meetings with Mauritanian government officials and activists.

Last August, Mauritania came under stinging criticism of several US labor unions calling on the US to halt aid to the desert African nation until it ends slavery.

The US trade union AFL-CIO, the American Federation of Labor and Congress of Industrial Organizations, this week called on the US trade representative to remove Mauritania from the roster of approved countries for the African Growth and Opportunity Act (AGOA) that is designed to promote the economic development of countries that can show they uphold human rights and meet labor standards.

The Australia-based Walk Free Movement estimated in its 2014 Global Slavery Index that there were 156,000 slaves in Mauritania, or some four percent of the population.

“IRA” is the largest anti-slavery organization in Mauritania, with members throughout the country who regularly mobilize to protest slavery and state-endorsed discrimination based on race, caste and gender.