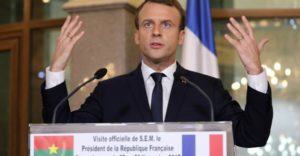 France’s President Emmanuel Macron on Tuesday told youths in Burkina Faso that he belonged to a new generation of French leaders who want to break with France’s past politics with its former colonies known as the “francafrique.”

The 39-year-old leader who was on a visit to Burkina Faso, part of a tour leading him also to Ghana and Côte d’Ivoire, said he would build partnerships with the continent rather than tell it what to do. His trip aimed at boosting cooperation in education, security, the digital economy and migration.

In his address to about 800 students at the University of Ouagadougou, where he spent more than an hour discussing migration, innovation, climate change and terrorism, Emmanuel Macon promised to facilitate innovation in Africa by creating a multi-billion euro fund that can generate about 450 million jobs by 2025 in Africa.

The investments in Africa should directly benefit the youth, he said.

Speaking about Migration, Macron said he would call for greater cooperation between Europe and Africa to tackle human trafficking. He also announced a European initiative to rescue African migrants enslaved in Libya.

Macron is due to address the European Union-Africa summit in Abidjan this Wednesday, focusing on education, investment in youth, migrants and economic development.