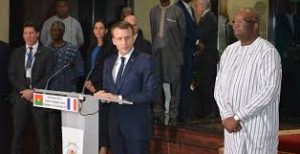 In a speech from Ouagadougou, French President Emmanuel Macron hailed Morocco’s King Mohammed VI for “his eminent, leading role in the fight against obscurantism and religious ex-tremism”.
Speaking to 800 students in the Ouagadougou University in Burkina Faso Tuesday, President Emmanuel Macron praised King Mohammed VI for his drive to eradicate religious radical-ism and extremism that is rampant on the continent and around the world.
“I want to speak to your consciences. You can be atheists or you can believe, but never let the religion in which you believe convince you that it is an adventure of destruction of the oth-er”.
“We must not leave any room for religious extremism by combating it everywhere, in schools, universities, in all forms of citizenship. Always fight it, in political speeches and in all forms. I want here to pay tribute to the King of Morocco for having always found the suitable words, given the prominent role that is his,” Macron said in reference to the Moroccan King’s counterterrorism and anti-religious radicalism strategy and his upholding of the “Islam of the Middle Path”.
King Mohamed VI has dramatically changed the image of his country, which has become the only state in North Africa to have been spared terror attacks.
The monarch has launched laudable programs and reforms that have planted seeds of peace and religious coexistence and significantly reduced radicalism in the country and on the continent.
The king-backed training programs for Imams and female preachers known as “Mourchidates” have contributed increas-ingly to the promotion of peace and acceptance of other reli-gions.
The training programs for the Imams have garnered interna-tional accolades and have been requested in Europe.
The programs are benefitting other African countries whose students are granted scholarships the King.
European countries have repeatedly lauded Morocco’s efforts to fight religious extremism, calling it a major partner in the fight against terrorism and the only stable country at the gate of Europe.