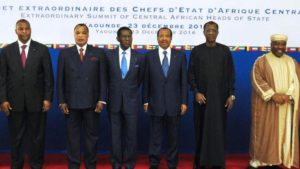 Leaders from the eleven states of Central Africa, gathered in Cameroon last week, decided to upgrade regional integration and set up to this end a steering committee.

The group’s move is to achieve in a long-term the creation of a single regional economic community in Central Africa.

According to the final communiqué of the meeting, the main objective of the steering committee is to reach a single eco-nomic community.

Thus, the States have two months to submit their comments on the terms of reference and the provisional report of the study on the institutional rapprochement of the three com-munities.