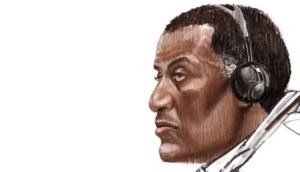 Eshetu Alemu is accused of ordering the execution of 75 people, of torturing nine people, and of controlling the illegal detention of more than 300 people in cruel and inhuman conditions in Ethiopia’s Gojjam province during the Red Terror.

The mass killing follows a Coup d’état by the Communist military regime, known as the Dergue, that overthrew Emperor Haile Selassie and seized power in Ethiopia.

In 2007, Ethiopia concluded a 12-year trial of former Dergue officials, convicting Eshetu Alemu and 57 other regime officials of genocide and crimes against humanity. Eshetu Alemu who was the former aide to the then-ruler Mengistu denied all the charges against him. He was judged in absentia and received a death sentenced.

Mariette Renckens, the judge who chaired the trial in the Nederland, told the court that Alemu was guilty of war crimes and treated his fellow citizens in a cold and calculating manner, including robbing them of their right to life.

Mengistu was ousted in 1991 after a series of revolts by insurgent groups.