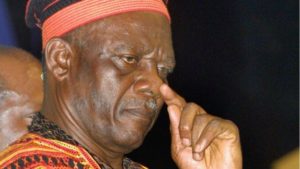 Ni John Fru Ndi, the emblematic leader of the Social Democratic Front, the main opposition party in Cameroon, announced he is not running in the 2018 presidential elections.

Speaking at the special congress of the party held in Bamenda on Thursday, the veteran leader reportedly said he was leaving the stage for the younger generation and will ‘not be presenting his candidature for the 2018 presidential elections’ in the central African nation.

Cameroon will hold senatorial elections on March 25, ahead of the presidential vote later this year. The SDF said it will participate in the process.

The SDF draws much of its backing from two predominantly English-speaking regions in the North West and south West of Cameroon, formerly ruled by both England and France. The two restive regions are currently riled by secessionists, who entered an armed phase of their struggle for independence.

President Paul Biya, 85, is expected to seek another term in office after over three decades in charge of the Central African nation.