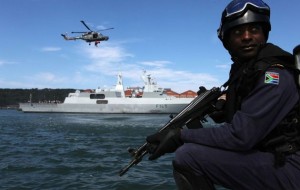 South African authorities decided to extend the anti-piracy patrols conducted by the South African navy in the Mozambique Channel under the memorandum of understanding concluded some three years ago with Mozambique and Tanzania to fight piracy off the east African coast.
The decision, made by President Jacob Zuma in his capacity as commander-in-chief of South African National Defence Force (SANDF), extends the patrol operations for at least an additional year, i.e. till March 2014.
The navy is supported in its operations by the SA Air Force and the SA land-based forces which help the navy’s Maritime Reaction Squadron in boarding and search operations of ships deemed “suspicious”.
According to the Presidency, 220 South African Navy sailors, supported by other components of the army have participated in anti-piracy operations between November 2012 and the end of March this year. They also helped rescue seafarers in distress and provided urgent medical treatment when needed.
Meanwhile, press report said Ugandan marine police is to receive by next June two US-made boats that will be used for patrol operations in Lake Victoria, the largest lake in the continent.
Uganda and Tanzania, which is also bordering on Lake Victoria, have decided to upgrade monitoring and patrol operations in the lake to protect the oil fields discovered in the Ugandan and Tanzanian sections of the lake and prevent illegal fishing.