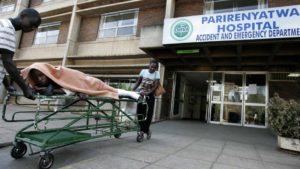 The strike is crippling public hospitals as patients are being turned away or left in corridors without assistance in major hospital across the southern African nation.

According to local media, the strike, which started slowly, last week, has gained strength in its second week, with doctors saying they will not go back to work until their demands are met.

The striking doctors accused the government of failing to procure adequate hospital equipment and essential drugs to allow them to provide quality service to patients at district and central hospitals.

Zimbabwe Hospital Doctors’ Association gave President Emmerson Mnangagwa led-government a 21-day ultimatum to resolve doctors’ concerns last month. The government had not, as agreed four years ago, increased on-call allowances for doctors to $10 an hour from the current $1.50, and has failed to fulfil other promises for better compensation and working conditions.

According to Reuters, Junior doctors, who earn a basic monthly salary of $329, were yet to get duty-free vehicles as agreed previously. In neighboring South Africa, junior doctors on internship earned the equivalent of $2,834 last year.