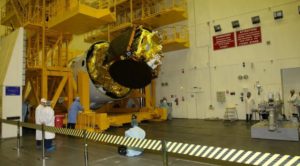 Angolan government on Monday confirmed the loss of its first national telecoms satellite, Angosat-1, launched in December from the Baikonur space center in Kazakhstan.

The Russian-made Angosat-1 was expected to have a working life of 15 years but contact with the satellite was soon lost and never recovered despite many attempts, according to Luanda.

According to Igor Frolov, a representative of manufacturer Energia RSC, the satellite remained in orbit from December 26 to 30. “After that we had a problem”.

A report published by Russia’s Tass news agency in December said engineers lost contact with Angosat 1 at the time it was supposed to extend its power-generating solar panels after separation from the Fregat upper stage.

The Angosat 1 joint project commenced in 2009 and has cost about $300m, according to Angola’s government.

The satellite was expected to play a crucial role in the promotion of telemedicine, a way of providing clinical care from a distance using telecommunications.

Angolan Telecommunications Minister Jose Carvalho da Rocha and the press service of Energiya aerospace corporation on Monday announced that the satellite would be replaced by a successor, Angosat-2, under a new agreement with Russia.

According to Jornal de Angola, construction of Angosat-2 is likely to take more than 18 months. Insurance indemnity for the lost satellite in the amount of $121 million will be incorporated in the payment for the second satellite.