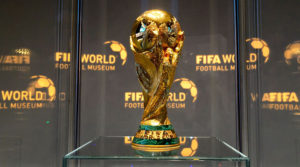 President of the Confederation of African Football (CAF), Ahmad Ahmad, has urged European football federations to vote for Morocco’s bid to host the 2026 World Cup.

“We tell Europe, vote for us, we will vote for you next time. It’s clear. It’s democracy,” Ahmad said in an interview with AFP on Monday.

“Time zones, distance, fans, this is a matter of interest for Europe (to vote for Morocco),” he said, adding that Europeans “do not need visas to travel to Morocco”.

“For all this, we believe that Europe should vote for Morocco,” said Ahmad, who chairs CAF since March 2017.
Pointing out that Morocco’s bid is Africa’s bid, he said that Morocco’s hosting of the World Cup would send a positive message for the rest of Africa and give hope to young Africans.

Morocco’s bid is facing competition from the three-ticket bid of the United States, Canada and Mexico. The best bidder will be announced on June 13 in Moscow.