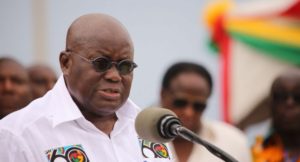 Ghana’s President Nana Akufo-Addo has revealed that his government had put back on track the country’s National Health Insurance Scheme (NHIS) that was crumbling under a huge debt, left behind by its predecessor.

According to Akufo-Addo, his government has paid about $250 million debt out of the $300 million debt left by the previous administration.

He further announced that payments to service providers were also being made since his administration took office in January 2017.

President Akufo-Addo, who made the disclosure in a Keynote address at the London School of Economics’ Africa Summit, said the Scheme had regained its effectiveness and that for a minimum amount, subscribers could have access to a wide range of medical services.

The Health Minister of the West African nation has, however, debunked the president’s claims as untenable.

Kwaku Agyemang-Manu has warned that the National Health Insurance Scheme risks collapsing unless government comes up with other innovative ways to fund the program.

Speaking at a health summit Monday, April 23, the health Minister said government is considering taxation to support the running of the scheme.

The National Health Insurance Authority (NHIA) recently announced plans to hike the Health Insurance levy by 1% moving it from 2.5% to 3.5%. Currently, former workers pay 2.5% of their 17.5% contribution from the tier one pension fund to run the NHIS.