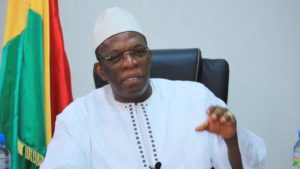 The new Prime Minister Fofana is the president of the Guinea for All (GPT) political party. He joined Conde’s government as a minister of public investment and relations with the private sector following a political alliance with ruling RPG Rainbow.

Last week, Alpha Conde who became president in 2010, following the first democratic election since Guinea’s independence from France in 1958, promised to listen to the “silent majority” and then proceed with a “major cabinet reshuffle” to “put ministers who are listening to the population and who take care of their programs.”

In another presidential decree published on national television broadcast news on Tuesday, Alpha Conde instructed the general secretaries of the ministerial departments to manage the day-to-day affairs of the ministries until the establishment of the new government.

About 10 people died when riots erupted in the West African nation in February and March after local elections that the opposition, led by Cellou Dalein Diallo said were marred by fraud.

Near-daily protests by the opposition, teachers, civil servants, residents of mining towns, and disgruntled students have rocked Conakry over the last months.

The protesters complain that the country’s rich mineral deposits have not translated into improved public services or job opportunities.