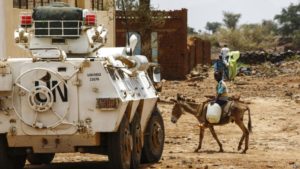 The UN Security Council on Monday said it plans to reduce troops from its joint peacekeeping force with the African Union in Darfur.

According to UN Under-Secretary General for Peace Operations, Jean-Pierre Lacroix, the situation in Darfur has changed dramatically in the right direction since the peak of the conflict.

The AU-UN Hybrid Mission in Darfur “must change” in accordance with the shifting realities on the ground, the UN official said on Monday, highlighting the need to “closely link” the mission’s drawdown to the scaling up of both peacekeeping and development activities.

“The peacekeeping mission (UNAMID) should be directed to the area where it is most needed, namely at the site of continued conflict in the Jebel Marra,” Jean-Pierre Lacroix told the Security Council on Monday. Fighting continues between Sudanese government forces and rebel groups in this mountainous region.

“In the rest of Darfur, the UN system should leverage the capabilities of the agencies, funds and programs best suited to tackling the problems that remain there.”

In this connection, Lacroix outlined two “central concepts” behind a new two-year strategy – each supporting the other.

The first, dealing with peacekeeping, would focus on protection of civilians, humanitarian support and mediation of local conflict.

The second central tenet, would bridge the evolution from peacekeeping to early recovery and development, in collaboration with the UN country team serving Darfur, he added.

“The whole-of-system transition concept focuses on addressing the critical drivers of conflict and preventing relapse,” explained the senior UN official.

For the roadmap to be realized, he underscored the need to have longer-term funding arrangements in place and increase voluntary contributions from donors.

The Security Council will vote on the latest plan on June 28 when mandate of the peacekeeping mission is renewed.