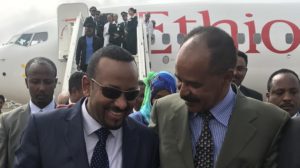 The visit comes after Ethiopia said it would fully accept the Algiers Agreement and decision of the Ethio-Eritrea Boundary Commission (EEBC).

It’s the first meeting between leaders of the two countries in almost 20 years. Prime Minister Abiy said they had agreed to re-open embassies in each other’s capitals. He added that his landlocked nation of 100 million would begin using a port in Eritrea.

Last month, Ethiopia said its flag carrier will resume commercial flights to Eritrea starting in September as a sign of improving relationship between the two countries.

As a reminder, Eritrean President Isaias Afwerki, in power from 1993 when the Red Sea state seceded from landlocked Ethiopia, sent a delegation including Foreign Minister Osman Saleh for talks in Ethiopia after Abiy said he was keen on normalizing relations.