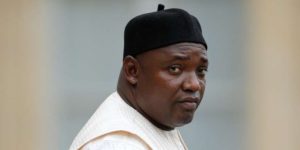 Buhari who held talks with his guest Barrow in Abuja on Wednesday underscored the importance of stability saying it had a ripple effect on the wider national agenda of every nation.

“The best route to national development is stability. When a country is not stable, you spend most of your financial resources on security,” he said.

In December 2016, former President Jammeh lost the election to businessman Adama Barrow, but he subsequently refused to step down. Then the political drama ended with an armed intervention threat by the Economic Community of West African States (ECOWAS) to remove Jammeh by force.

He finally relented and left the country, taking with him a fleet of luxury cars and cash to Equatorial Guinea.

Barrow’s visit to Nigeria is his second since he came to power. He congratulated Buhari on his new regional position as new chairperson of ECOWAS, in replacement of the Togolese President.