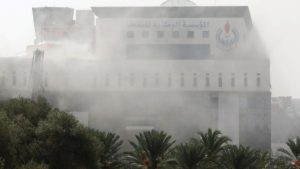 Rockets were fired late on Tuesday in the direction of the airport in Libya’s capital Tripoli, Reuters reported.

According to a spokesman for a faction controlling Matiga airport, the only one functioning in the capital, there were no casualties or damage.

A Libyan Airlines flight bound for Tripoli from Alexandria, Egypt, was diverted to Misrata, the airport said on its Facebook page.

A spokesman for Misrata airport quoted by Reuters said that all flights bound for Tripoli would be diverted to Misrata.

In a separate development, the Islamic State group claimed responsibility for a shooting attack on the headquarters of Libyan state oil company NOC in Tripoli.

Since the 2011 ousting and killing of Muammar Gaddafi, Libya has been divided between rival powers with renegade general Khalifa Haftar’s forces dominating the country’s east. A UN-backed unity government sits in the capital Tripoli, while numerous armed groups and jihadists are active in different parts of Libya.

Tuesday’s attack comes less than a week after the United Nations brokered a fragile truce between rival armed groups in Tripoli.