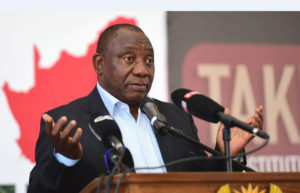 President Cyril Ramaphosa on Tuesday said there was no reason to believe that any country would impose sanctions on South Africa over land reforms.

The controversy began last month when Trump tweeted that he had asked Secretary of State Mike Pompeo to “closely study the South Africa land and farm seizures and expropriations and the large scale killing of farmers.”

The ruling South African National Congress (ANC) plans to change the constitution to allow the expropriation of land without compensation, as whites still own the majority of South Africa’s land.

According to Ramaphosa who was answering a question from an opposition party in the Parliament on Tuesday, expropriations formed one part of a broader land redistribution and agricultural development program that would only be introduced following public and parliamentary consultation.

The government has no reason to believe that any country would impose sanctions on South Africa for any actions that it takes, “actions that are constitutional, that are lawful and consistent with international law,” he said.

Ramaphosa added that the government was ready to discuss its land reform plans with any country.

As a reminder, Trump is not the only foreign politician showing interest in South Africa’s land reform policies.