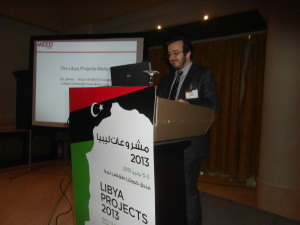 The Assistant Deputy Minister of Telecommunications, Atef Al Bahri, was speaking at the third day of MEED’s “Libya Projects 2013” conference. It will be focusing on 4 main issues: a new law, securing networks, enhancing them and finally restructuring the ministry.
The new law is expected to allow the private sector to participate competitively in the telecoms. The Assistant deputy Minister said the draft, which was completed in March, has been sent to the congress for voting. The government recently granted 25 ISP, 23 VSAT and fleet tracking licenses to new private companies. Libya is criticized for the dominance of the state in the sector with 8 main telecoms companies belonging. In this aspect, Al Bahri said there is “no real competition” for now.
Second on the agenda is ensuring that the country’s networks are secure, before beginning the third step, which is about improving the networks. Parts of the plans are the establishment of a cyber-security for the sector and the developing of e-services. He also cited that Al Madar and Libyana mobile operators are working on increasing and improving their services.  State owned Libyan Telecom and Technology dominates the provision of Internet service in the country, and it will soon be launching its wireless Internet service (WIMAX) phase two project, providing service to 100,000 new users in 100 new cities.
The final major adjustment to be done will be within the ministry. The Assistant Deputy Minister of Telecommunications said the employees will be reevaluated and some of them will be trained to develop their potentials. The training program is expected to improve the ministry’s efficiency and reduce the level of bureaucracy.