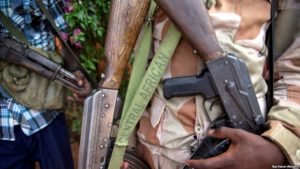 French Defense Minister Florence Parly on Sunday told Pan-African weekly Magazine Jeune Afrique that Russia has been expanding influence in Central African Republic (CAR) over the past months, but is not likely to stabilize the war-torn former French colony.

CAR, one of the world’s poorest countries, has been subjected to a UN Security Council arms embargo since 2013, when an armed, mainly Muslim coalition known as Seleka, seized power.

In December 2017, Russia secured an exemption to the Security Council arms embargo, allowing Moscow to deliver arms and training to boost the capabilities of the CAR’s military and security forces.

Russian instructors have thus been involved in a range of tasks, including: escorting convoys of building materials for hospitals; providing security for hospitals donated by Russia; and training police officers.

Asked if Russia’s growing influence in CAR was posing a threat to French interests, French Defense Minister Florence Parly said: “Africa belongs to Africans and no one else, no more to the Russians than the French.”

Russia has asserted its presence in the Central African Republic in recent months, it is true, but “I am not sure that this presence and the actions deployed by Moscow, like the agreements negotiated in Khartoum at the end of August, help to stabilize the country”.

Russia says it is seeking to restore peace in the CAR with the supply of arms and training to government forces. But Moscow has also made no secret of its economic interests in the country’s natural resources.

President Putin met CAR’s President Touadera in St. Petersburg in May. The Russian leader said then that Moscow “will be happy to consider various plans to boost our relations, first of all in the economic and humanitarian fields.”