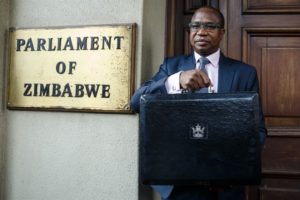 The Zimbabwean government on Thursday announced a 5 percent cut in the salaries of the president, ministers and senior civil servants, effective January 2019.

According to the Finance Minister, Mthuli Ncube, the move will help clear the pay roll of ghost names and reduce spending by the state.

Presenting the 2019 budget to parliamentarians on Thursday, Ncube said salaries of public servants absorb close to 90 percent of Zimbabwe’s income.

He said the budget marked a step towards Zimbabwe attaining its vision of an “upper middle income country by 2030.” The budget also provides $53 million in compensation to white farmers.

The economy of the Southern African nation expects to grow by 3.1 percent in 2019, which is lower than the 2018 anticipated growth of 4 percent.

Zimbabwe abandoned its own currency a decade ago amid hyperinflation, with a mixture of dollar, pound and South African rand circulating instead.

Speculation last month that the government was about to officially devalue the electronic dollars led to a surge in inflation as panic-buying took hold.

Last month, President Emmerson Mnangagwa promised to revive the economy, pay foreign debts that the country has defaulted on since 1999 and end the international pariah status that Zimbabwe acquired under Robert Mugabe’s near four-decade rule.

Zimbabwe owes the World Bank $1.15 billion, the African development bank $601 million and over $3 billion to the Paris Club, among other creditors.