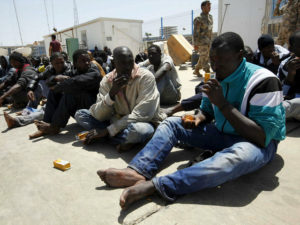 From unlawful killings, arbitrary detention and torture, to gang rape, slavery, and human trafficking, the report covers a 20-month period up to August 2018, and details a terrible litany of violations and abuses committed by a range of State officials, armed groups, smugglers and traffickers against migrants and refugees.

As of Sept. 18, a total of 6,800 migrants were held in detention centers in western Libya, the U.N. report said.

Amnesty International estimates that about 20,000 people were intercepted by the Libyan coast guard in 2017 and taken back to Libya.

At least 8,000 migrants are currently being held across 18 detention centers linked to the internationally recognized government in Tripoli, according to UNHCR.

As the UN report was being released, Libya’s coast guard said they have intercepted about 15,000 migrants trying to reach Italy by sea in 2018. But the 61-page report gave a much higher estimate saying the coast guard had intercepted or rescued 29,000 migrants in the first nine months of the year.