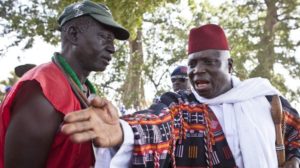 The Truth, Reconciliation and Reparations Commission (TRRC) in Gambia has started investigating into Jammeh’s 22-year era of oppression which ended in 2016 after he was forced from power.

The commission has started hearing testimonies from witnesses on Monday, local media reported.

Modelled on South Africa’s investigation into its apartheid era, The Truth, Reconciliation and Reparations Commission was established and launched on 5th October 2018 to look into alleged human rights violations during the 22-year rule of former Gambian President Yahya Jammeh.

Right organization such as Amnesty International have hailed the commission as a step towards securing justice, truth and reparations in the tiny west African nation.

Jammeh’s regime is accused of killing journalists, torturing and killing political opponents, and sponsoring a campaign that allowed so-called “witch doctors” to abduct hundreds of people and force them to drink unknown substances.

Interviews with 30 former Gambian officials, including eleven officers directly involved in the incident, reveal that the migrants, who were bound for Europe but were suspected of being mercenaries intent on overthrowing Jammeh, were murdered after having been detained by Jammeh’s closest deputies in the army, navy, and police forces.

As a reminder, after losing power in 2016, Jammeh fled to Equatorial Guinea.
The Amnesty International campaigner for West Africa, Marta Colomer said, the hearings of the Truth Commission mark efforts to hold Jammeh accountable, whether in Gambia, Equatorial Guinea or another country.