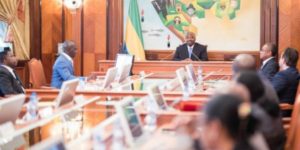 Gabon’s President Ali Bongo has returned to Morocco to continue his medical rehabilitation after he spent 48 hours at home where he chaired a cabinet meeting.

The Gabonese leader returned to the North African country on Feb. 27. He had come back home on Feb.25.

During the 48-hour stay, Ali Bongo chaired a cabinet meeting, made several appointments including a new foreign minister and a new envoy to the Moroccan kingdom.

The February comeback was the second by the African leader from Morocco where he had been receiving medical treatment after suffering a stroke in Saudi Arabia late October while attending an investment conference.

The 54-year old President made a swift trip, less than 24 hours, to Gabon in December to oversee the inauguration of a new cabinet.