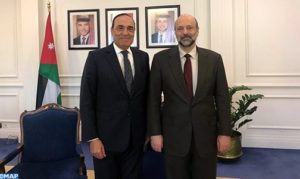 Speaker of Moroccan House of Representatives (lower house), Habib El Malki, and Jordanian Prime Minister, Omar Razzaz, hailed on Monday in Amman the excellent ties binding the two countries which same viewpoints and stands on several regional and international issues, including the Palestinian cause and the right of the Palestinians to establish their independent state with Al Quds as its capital.

During his meeting with the Jordanian PM on the sidelines of the 29th Conference of the Arab Inter-Parliamentary Union, El Malki hailed Jordan’s support to Morocco’s territorial integrity and sovereignty over the Sahara.

For his part, the Jordanian official commended the distinguished relations existing between the two countries’ Sovereigns and peoples, hailing the convergence of Moroccan and Jordanian views on various bilateral and multilateral issues.

The 29th conference of the Arab Inter-Parliamentary Union (AIPU) opened Sunday in Jordanian capital under the title, “Jerusalem is the eternal capital of Palestine.”

The two-day event discussed ways of building a unified Arab stance on various regional and international issues, the fight against combating terrorism and the rights of women and children.