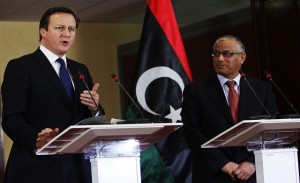 UK Generals mull sending hundreds of British soldiers to Libya to help train the army of the North African country to enable it face and ward off the growing terrorist threat of Al Qaeda.
Britain has already sent some 50 troops to West Africa to train the Malian Army which is battling an Islamist insurgency.
According to some British press reports, the top brass military started considering the Libyan mission amid mounting fears that the war-ravaged country is becoming a safe haven for Islamist fanatics after the collapse of Gadhafi regime in 2011.
Prime Minister David Cameron has voiced deep concern that Libya could quickly become a failed state and a haven for al-Qaeda militants as armed militias continue to operate across the country committing widespread human rights abuses with impunity, fuelling insecurity and hindering the rebuilding of state institutions.
Four UK infantry Brigade, based in Catterick, North Yorkshire, have been ordered to begin preparing to deploy in Libya wherein some 2,000 infantrymen would be given lessons in basic soldiering skills to prevent Islamist militants from setting foot in the country.
The British military will help train the Libyan soldiers on how to secure its huge borders and prevent the flow of illegal arms shipments to terrorist groups around the world.
A UN panel has sounded lately the alarm over the highly fragile and volatile situation in Libya which is awash with weapons and is infiltrated by al-Qaeda elements.
“Libya has over the past two years become a significant and attractive source of weaponry in the region”, said the UN panel, stressing that “the lack of an effective security system remains one of the primary obstacles to securing military materiel and controlling the borders in the North African country.”
Durant the latest G8 conference, some countries have already offered to train more than 7,000 Libyan troops to help the government there improve the stability of the country.
It is within the frame of the G8 initiative that the UK has offered to train up to 2,000 Libyan soldiers in basic infantry skills. This is part of a package of defense and security assistance to the Libyan government which will pay for the British military training.