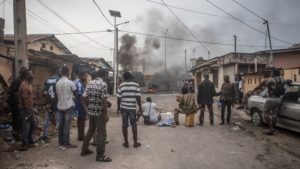 Riot police in Benin have fired with automatic rifles at protestors demonstrating against controversial parliamentary polls in the tiny West African nation.

Thousands of people have been protesting since Wednesday, erecting makeshift barricades of burning tires and calling for President Patrice Talon to step down.

The unrest followed the electoral commission’s decision to bar opposition parties from standing in the election because they were unable to meet strict criteria under a new election law.

The government banned protests in the lead up to polls, with security officers firing tear gas to disperse demonstrators including against former presidents Nicephore Soglo and Boni Yayi this month.

The situation has elicited warning signs from civil society and right groups within and outside of the country.

The government on Sunday shut down the internet joining the list of African states, including Sudan, DR Congo, and Egypt who have limited online access ahead of key elections, political referenda, or anti-government protests this year.

Nicknamed “King Cotton” Patrice Talon funded Boni Yayi’s two presidential campaigns, one in 2006 and another in 2011 before becoming his main rival and accused of trying to poison Yayi. He went into exile in Paris for several years. He was only able to return to Benin in 2016 and won the presidential election the same year.

Benin is an oasis of stability and democracy in the troubled West African region, where most of its neighbors have struggled with coups, political unrest and the Boko Haram insurgency in recent years.