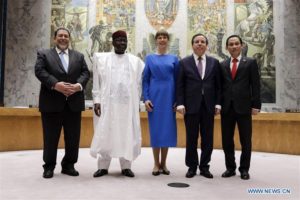 Niger and Tunisia will join the United Nations’ Security Council as of Januray 2020 for a two-year period as non-permanent members.

The vote took place on 7 June at the United Nations (UN) headquarters in New York City. All 193 UN member states were present to cast their votes.

All five non-permanent members of the Security Council will start their mandate on 1 January 2020.They will replace Côte d’Ivoire, Equatorial Guinea, Kuwait, Peru and Poland whose mandates expire on 31 December 2019.

The Security Council’s powers include the establishment of peacekeeping operations and international sanctions as well as the authorization of military actions through resolutions.