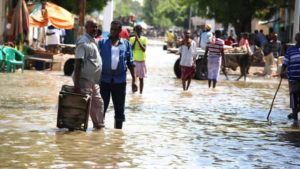 About 6,000 people have lost their homes to flooding in Bangui, the capital of the Central African Republic after days of heavy rains and an outburst of a river.

A local Member of Parliament fears the use of informal latrines in the neighborhood could lead to serious health crisis in the Central African nation.

Central African Republic leads a Climate Change Vulnerability Index. It is also listed as most at risk of flooding.

Sixteen cases of haemorrhagic fever were reported on 13 October in a village in the eastern Mbomou Prefecture. A team of Government and humanitarian health officials were sent to the area to investigate. Preliminary result from tested samples turned out negative for Ebola. Further tests are being conducted to determine the cause of the fever.

Families with partially or completely damaged houses were welcomed by families and friends, thus exacerbating the already limited resources of these host families. Water and sanitation infrastructure have also been destroyed, including water wells and latrines.

According to a report from the International Federation of Red Cross and Red Crescent Societies (IFRC), areas of Ouham-Pendé prefecture were the worst affected, in particular the city of Paoua and the nearby village of Poumaïdji.

Rich in natural resources, the Central African Republic has been torn apart since 2013 by a war that has forced nearly a quarter of its 4.7 million inhabitants to flee their homes.