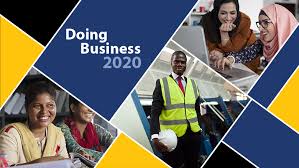 Morocco was listed along with Mauritius and Rwanda as the top-performing African economies in the “Doing Business 2020” report released Thursday by the World Bank Group.

Morocco improved its spot jumping 7 spots in the listing to take the 53rd place amid 190 countries.

According to the report, Morocco is the country offering the best business climate in North Africa ahead of Tunisia (78th), Egypt, Mauritania and Libya.

“This breakthrough marks significant progress towards Morocco’s goal of reaching the top 50 largest economies in the world by 2021,” the department of the head of the government said in a statement.

“Morocco’s positive score in this new world ranking is due to the adoption of a series of important measures and reforms related to the business and activities of Moroccan companies, and which are part of the work program of the National Committee on the Business Environment (CNEA),” the statement said.

The directives given by King Mohammed VI to the government and various administrations have played a determining role in improving Morocco’s standing in the index.

Actually, the Monarch repeatedly underlined, most recently in a message to the Second international Conference on Justice convened recently in Marrakech that “creating a safe environment for investment from the economic, social, legal, administrative and structural perspectives means we all have to strive doubly hard to consolidate the rule of law, enhance the independence of the judiciary, promote judicial foresight, ensure staff training, improve judicial administration and strengthen governance in the judiciary.”

To this end, the Monarch called for the adoption of an integrated, holistic approach to address investment issues through laws relating to commerce, banking, taxation, customs, real estate, documentation and social affairs. The approach should also take into account the international and technological dimensions imposed by the globalization of trade, finance and economic exchange around the world, he said.

The King surveyed the reforms undertaken by Morocco and the endeavors made to simplify and speed up administrative and judicial procedures, to help develop the financial and business system, promote investment, and boost economic activity, pointing out that these endeavors have led to an increase in the investments attracted by the Kingdom as well as to an improvement in the country’s ranking in the Doing Business Index 2019.

This has contributed to enhancing Morocco’s standing as a trustworthy and credible country in the eyes of foreign investors as well as in economic and financial circles.

“We look forward to moving further up the Doing Business Index and improve Morocco’s position so that it may feature among the top 50 countries in the world in terms of the quality of the business environment,” the King said.

These reforms have also strengthened the protection of minority investors and established the principle of transparency and good governance based on international standards in this area.

As a result, Morocco’s ranking in the minority investor protection index moved up from the 64th place to the 37th place.

Furthermore, Morocco ranked 16th in the world in terms of the building permit index by launching a new version of the electronic platform for the digital management of building permits.

Morocco’s ranking in the electricity grid connection index (34th worldwide compared to 59th last year) has also improved thanks to the facilitation of companies’ electrical connections in Casablanca through the launch of an electronic platform, called “e-Raccordement”, for submitting and monitoring medium-voltage connection requests and developing the use of prefabricated transformer substations.

The World Bank report also refers to a series of other reforms that have contributed to improving Morocco’s business climate and international ranking.

The annual ranking looks at 190 nations and evaluates the business environment on the basis of 10 measures such as access to credit, with an overall ranking that compares with the other nations.

In Africa, Somalia came in last overall again, with Eritrea, Libya, South Sudan and the Central African Republic also among the worst-performing economies. Most of the bottom 20 economies in the rankings are from Sub-Saharan Africa.

The rankings are meant to spur reforms to attract investment and boost employment, issues that are especially critical to economic development in poorer countries including sub-Saharan Africa.