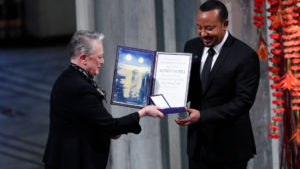 Ethiopia’s Prime Minister Abiy Ahmed on Tuesday said militant groups and global military powers both pose a threat to peace and stability in the Horn of Africa.

Mr. Abiy made the statement when receiving the Nobel Peace Prize lfor forging a peace accord with Eritrea.

In a speech delivered at Oslo City Hall before dignitaries including Norway’s King Harald V, Abiy praised the “good will” of Eritrean President Isaias Afwerki and described the two countries’ commitment to peace as “iron-clad”.

Pointing out that he was accepting the Nobel Peace Prize on behalf of Ethiopians and Eritreans, especially those who made the ultimate sacrifice in the cause of peace, he recalled that during the war between Ethiopia and Eritrea, an estimated one hundred thousand soldiers and civilians lost their lives.

“The aftermath of the war also left untold numbers of families broken. It also permanently shattered communities on both sides.
“Massive destruction of infrastructure further amplified the post-war economic burden.

“Socially, the war resulted in mass displacements, loss of livelihoods, deportation and denationalization of citizens,” he said.

Following the end of active armed conflict in June 2000, Ethiopia and Eritrea remained deadlocked in a stalemate of no-war, no-peace for two decades.

As it was, the war and the stalemate that followed were a threat for regional peace, with fears that a resumption of active combat between Ethiopia and Eritrea would destabilize the entire Horn region.

The Ethiopian PM then warned against the expanding military presence of global military superpowers in the Horn of Africa as well as against the presence of terrorist and extremist groups which seek to establish a foothold in the region.

Since taking power, Abiy has ordered the release of thousands of prisoners, opened state-owned companies to private investment and dramatically loosened restrictions on media.

Abiy is the first leader from Ethiopia’s largest ethnic community, the Oromo, which has complained for decades of economic, cultural and political marginalization.

Some have hailed him as Ethiopia’s Mikhail Gorbachev, a reference to the leader who attempted to bring rapid change to the ailing Soviet Union in the late 1980s.