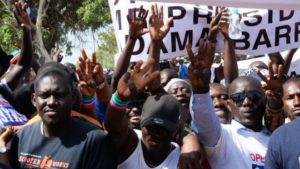 Police in the Gambia has arrested over 130 people and injured more than two dozen as protests calling for President Adama Barrow to step down turned violent.

Barrow came to power after a 2016 election, ending 22 years of authoritarian rule by Yahya Jammeh.

A Memorandum of Understanding (MOU) agreed by the opposition coalition in 2016 stipulated that if Barrow were to win, he would serve for just three years as a transitional president before organizing fresh elections in which he would not stand.

But, Barrow has now reneged on his campaign promise, saying the constitution requires him to serve out a full five-year term.

In response, a movement called “Three Years Jotna” – which means “enough” in the local Wolof language – began protesting last month to demand his departure. The Gambian government on Sunday launched a crackdown on the movement.

Police in the capital Banjul fired tear gas at hundreds of protesters, who responded by throwing stones and setting tyres on fire.

In a statement late on Sunday, government spokesman Ebrima Sankareh said the protesters had stormed a police barricade and chanted that they planned to unseat Barrow.

The “Three Years Jotna” president Abdou Njie was also arrested on Sunday, according to an AFP journalist, although the government would not confirm it was holding Njie.

Among those arrested were the director of the King FM radio station, and a radio presenter who had been charged with inciting violence, a station employee told AFP.

The head of another radio station, Digital FM, was also arrested and it was not known where he was being held, Saikou Jammeh, secretary general of Gambia Press Union.