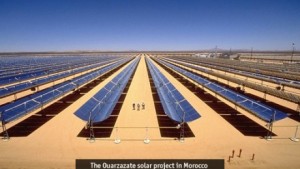 In line with the Cherifien Kingdom’s ambitions to embark on renewable energy, Morocco’s solar energy agency, MASEN, is getting ready to announce the winner of the contract worth more than $500 million for a 160 megawatt solar power plant before the weekend according to an official well informed about the deal who confided that a consortium led by Saudi International Company for Water and Power (ACWA) is set to win it.
The power plants are to build in the southern region of Morocco and it is hoped that it will bring along a $9 billion worth of investments which will supply the kingdom with 2 gigawatts of electricity by 2020 in order to meet Morocco’s annual demand increment of 7% in electricity consumption.
According to the anonymous official, three bidders have been short listed for the contract but the consortium led by Saudi International Company for Water and Power (ACWA) stands a better chance to win MASEN’s first contract of such nature. The other two contestants are Abeinsa ICI, Abengoa Solar, Mitsui and Abu Dhabi National Energy Company seconded by Enel and ACS SCE.
No official comments were made on behalf of MASEN but it has already made known its plans to launch another tender for the building of a 50-megawatt photovoltaic module and CSP towers of at least 50 megawatts in Ouarzazate. The agency is also working on completing in three years from now a 500-megawatt solar energy complex in the same town according to Mustafa Bakkoury, MASEN’s head.
Morocco is also hoping to sell some of the energy derived from its solar project to the European countries.