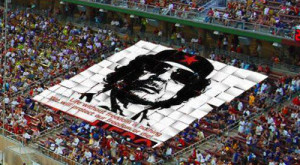 “Law 37″ which was passed by the National Transitional Council’s Legal Committee a month ago has been branded unconstitutional by Libya’s Supreme Court during a short session. The law considers the “praising or glorifying Muammar Gaddafi, his regime, his ideas or his sons… is punishable by a prison sentence” varying from three to fifteen years including attacks on the 17th February revolution which ousted Gaddafi, Islam or state and public institutions.
Taken by human rights group to be against the freedom of expression, they forwarded an appeal to the court. After the court sitting, the leader of the court’s chamber, judge Kamal Bashir Dahan, announced that “In the name of the people, the court has decided on the unconstitutionality of Law No 37.” The court’s ruling is considered to be a major step in cementing its place in the new political landscape of Libya with the elections just around the corner.
The nullification of the law was applauded by the civil right groups and legal experts’ in and outside of the country.  Appealing lawyer, Salah Al-Merghani, related the inconvenience of the law with country’s first elections after Colonel Gaddafi’s era. He described the law as “unconstitutional as it prevents the freedom of speech. We are nearing elections and a basic step is to ensure there is freedom of speech.”
Libya is hoping for a democratically elected government in the July 7th elections but recent clashes between armed faction groups and tribes coupled with the interim government’s inability to disarm them puts the change that they have fought for under jeopardy because the state is yet to impose its authority on the whole territory.