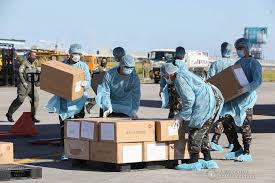 Debate on good management of the funds received by the Central African Republic to cope with covid-19 retains attention more than prevention measures in the country.

Aid announcements have been steadily coming in the form of donations in direct projects or in cash from the European Union, which pledged €30 million, the World Bank ($5 million) or the United States ($3 million).

This raises questions in the country and heats the debate in the public and political spheres on the good management of these funds.

The Opposition Coalition as well as various personalities questioned the use and management of the funds allocated to the fight against Covid 19. This is the case, for example, of MP Jean-Pierre Mara.

“What we are concerned about is how will the money that is made available be managed? Does the State intend to set up a structure that is supposed to manage all these donations in a correct and equitable way? »

International funds come with defined and often preconditioned terms and conditions, says the Minister of Health. As for national and private funds handed over to the Ministry of Health, discussions are under way.

A management committee of the funds, to be placed under the President of the Republic within the framework of the crisis committee, is reportedly envisaged. The modalities of this management are currently being defined.

The minister warns that political manipulations are unfavorable to the campaign against Covid-19 because they do not create a supportive environment for an effective fight against the virus.

MP Jean-Pierre Mara fears that these sums would be used for electoral purposes rather than to be used in a common fund set up to help all over the country.