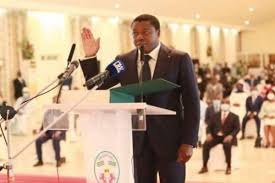 Faure Gnassingbé was sworn in before the Constitutional Court on Sunday for a fourth term at the helm of the country, after he won the presidential election of February 22.

During the solemn ceremony, the president of the Constitutional Court, Abdou Assouma, warned those who might still be tempted to contest the election results of the presidential election.

Gabriel Agbéyome Kodjo, who came second with 19.46% of the votes, does not accept the results. Reacting to the ceremony, the candidate of the momentum Kpodzro, who is at liberty under judicial supervision with other leaders of his movement, wrote on his Twitter account: “Sad day for the Togolese who continue their Way of the Cross despite their firm will to build a new path of life, always thwarted by dark forces. The time has come. Together for a just, fraternal and humane Togo”.