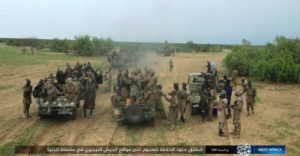 The Nigerien Ministry of Defense says two attacks occurred on Sunday. One at midday: the army claims to have intercepted “a column of vehicles coming from Tumbun Fulani”, a locality 24km north-east of Bosso. The second attack occurred around 5:45 p.m., at the border crossing with Nigeria. The Nigerien Ministry of Defense deplores two deaths and three wounded but says that 50 people were “neutralized” in the Nigerian village of Dumba’a.
The attack was claimed on Wednesday May 6 by the Iswap, which claims to have killed five soldiers.
ISWAP claims responsibility for the attack in a short two-minute video broadcast by the West African branch of the Islamic state. The video shows, among other things, several armed men attacking what appears to be a military post. However, it is impossible to date or locate these images accurately. The insurgents seize vehicles and ammunition stocks.