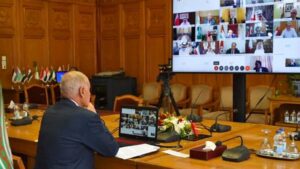 Arab Foreign Ministers have expressed total opposition to all forms of interference in Libya and to all plans to divide the country, calling for the disbanding of militias and the withdrawal of mercenaries from Libyan territory in order to make a ceasefire viable.

The Arab League Foreign Ministers, who held an emergency meeting Tuesday at the call of Egypt, called in their final communiqué for an immediate ceasefire in Libya and, above all, for a reduction in tensions around Sirte, which would allow a rapid resumption of military negotiations under UN auspices.

They also declared their support for an exclusive political process, far from any military solution, and their rejection of any form of foreign or regional interference in the affairs of Arab countries.

Even if they did not mention the foreign intervening parties, they were mainly alluding to Turkey, whose backing enabled the internationally recognized Government of national Accord, GNA, to make gains in its conflict with the east-based warlord Khalifa Haftar.

Haftar’s militias, made up from regional and Russian mercenaries, launched an offensive to take Tripoli in April last year.

Ankara’s intervention on the GNA’s side led to a sudden shift in front lines this month as Libya’s forces pushed back Haftar’s militias and its allies from most of northwest Libya towards the central coastal city of Sirte.

The Libyan army recently inflicted heavy blows on Haftar and liberated Tarhuna, in addition to other strategic locations, including Al Watiya airbase, from his militias.

The Arab foreign Ministers also insisted, in their final communiqué, on the unification of institutions and the return of a viable Libyan state and mentioned the important role of Libya’s neighbors, and called for more coordination among them and with the United Nations, the European Union and the African Union.

The GNA was only represented by the Libyan delegate to the League who criticized Cairo during the meeting. He hammered home that peace initiatives must come from countries that are not involved in the conflict, and that do not threaten “the legal government with a declaration of war,” alluding to Egypt, which threatened last week to intervene militarily in Libya if the GNA forces attack the strategic city of Sirte.

The meeting by videoconference took place while shooting was still being exchanged near Sirte between Haftar’s Libyan National Army and the GNA forces. A senior Turkish official announced that the GNA, aided by Ankara, is continuing preparations to take Sirte and Al Joufra.