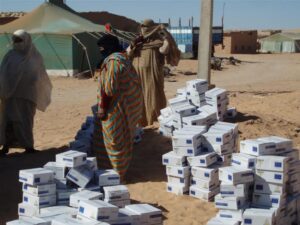 The Budgetary Control and Development Committees of the European Parliament are both actively involved in investigating the case of the Misappropriation of Humanitarian Aid to the Tindouf refugee camps in Southern Algeria, as reported in EUToday last week.
After having been largely behind the outcry aroused in the Parliament around the theme of the embezzlement of European humanitarian aid, we return today through this article to share with our readers the latest developments on this subject:
The day after publication, French MEP Nicolas Bay, Vice-President of the Parliament’s Identity and Democracy group issued a damning statement in which he referred to the matter of the 2003-07 investigation into the matter by OLAF, the EU’s anti-fraud office.
In January 2015, a European Union report written in 2007 by the European Anti-Fraud Office was finally published, revealing a system of massive embezzlement of humanitarian aid orchestrated by the Polisario Front – an armed independence movement which claims part of the Moroccan Sahara – with the complicity of Algeria. This damning report indicated that the actual number of refugees in the Tindouf camps, controlled by the Polisario in western Algeria, was completely unknown: the authorities prohibit the EU from sending a mission to assess the situation. A hearing in the European Parliament in July 2015 even revealed that Algeria, which receives aid at the port of Oran, taxed at 5% of aid sent! (Nicolas Bay MEP).
The following day, Mr. Bay’s French colleague, Dominique Bilde, took to the floor during a hearing of the Parliament’s Development Committee in order to confront EU Commissioner Janez Lenarčič, who is in charge of humanitarian aid.
Calling for a prompt investigation she said “Part of the humanitarian aid would be sold to help purchase military equipment… tanks and missiles, and the number of refugees would be greatly overstated in order to capture more subsidies. This shady system has been documented since the OLAF investigation… When will the European Commission have the courage to put an end to this scandal and finally make the Algerian state face up to its responsibilities? ”
Commissioner Lenarčič confirmed “there are often doubts about the real figures in the areas where we cannot access”. Algeria and Polisario consistently refuse any census of the populations despite multiple calls from international organisations including the UN and the UNHCR.
Madame Bilde confirmed to us that she had previously raised the issue of misappropriation the EU aid with Commissioner Lenarčič’s predecessor Christos Stylianides, stressing the need for greater control over the future of European aid in conflict zones, the cases of diversion being proven, and that she had not received a satisfactory response.
Her intervention was followed on July 6th with a publication by our colleagues in the Brussels press of an op-ed in which she gave her reaction to the Commissioner’s response.
Commissioner Lenarčič’s response has not been satisfactory: however I hope that the increased media coverage of these hijackings will finally push the Commission to put an end to these abuses and I, for my part, will continue to monitor this matter closely.
In her article she announced that she will prepare a resolution to demand an audit of the humanitarian aid of the Tindouf camps in Algeria and to exhort the European Commission to implement a population census in the Tindouf camps.
On July 9th, along with German MEP Bernhard Zimniok, and Gianna Gancia from Italy, both members of the Parliament’s Development Committee, Mme. Bilde tabled a Motion for a Resolution on the matter which:
Calls on the European Union to work jointly with the United Nations to supervise a census of refugees from the Tindouf camps in collaboration with the competent authorities in Algeria;
Calls on the European Union to audit the use of European humanitarian aid by Polisario since 2015.
According to article 143 of the European Parliament internal rules, The motion of resolution will now be with the office of President of the European Parliament, the Italian David Sassoli, for his consideration before submitting it to one of the competent commissions most likely DEVE or CONT Commission.