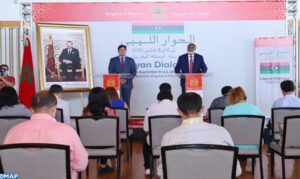 In an article published Sunday under the title “Libyan Dialogue Leads to Comprehensive Agreements”, the South-African media outlet underlines that the delegations of the Libyan High Council of State and the Tobruk Parliament jointly announced on Thursday that they had reached a comprehensive agreement on the “transparent and objective criteria and mechanisms to occupy the posts of sovereignty”.

This week’s meeting in Bouznika, “resulted in positive agreements to end the strife,” the article says, adding that both parties also agreed to continue this dialogue and to resume these meetings during the last week of September.

Delegations of the Libyan High Council of State and the Tobruk Parliament called on the UN and the international community to support Morocco’s efforts to create the right conditions and a conducive climate to achieve a comprehensive political solution in Libya, the source notes.

The two delegations also reiterated thanks and gratitude to the Kingdom of Morocco and to King Mohammed VI “for the support and assistance” provided to overcome the Libyan crisis and fulfil the hopes of the Libyan people and their aspirations to build a civilian and democratic State that enjoys peace, security, and stability.

The Libyan High Council of State and the Tobruk Parliament affirmed that their meetings took place in “a friendly and fraternal atmosphere marked by understanding and consensus”.

The website quoted Moroccan Foreign Affairs Minister Nasser Bourita as saying in comments on the agreements that “The compromises born from the meetings of the two delegations of the Libyan High Council of State and the Tobruk Parliament have confirmed the Kingdom’s belief that Libyans are capable of finding solutions to their problems without tutelage or influence”.

Bourita said the High Council of State and the House of Representatives are “the cornerstones” for any progress towards finding solutions to issues concerning the Libyan crisis, the news website points out.