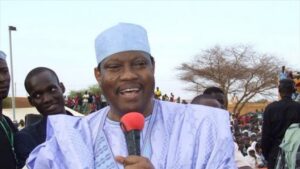 The legal battle over the leadership of the main opposition party, Moden Fa Lumana, continues in Niger. The High Court of Niamey issued an order on Tuesday ordering Noma Oumarou to stop behaving as the party’s president.
The decision of the Niamey High Court ordered “the cessation of the manifestly unlawful disturbance created by Noma Oumarou, who continues to behave as president of the Moden Fa Lumana party”. The judges also ordered Noma Oumarou to stop “using party attributes.
The party of historical opponent Hama Amadou faces dissent led by Noma Oumarou, who led the party when Hama Amadou, convicted in the case of the stolen Nigerian babies, was in exile.
Ten days ago, two congresses were held on the same day in Dosso, about a hundred kilometers from Niamey, in the name of the Moden Fa Lumana. On the one hand, Hama Amadou’s supporters had proclaimed him the “moral authority of the party” and designated him as a candidate for the presidential election to be held on December 27. On the other hand, Noma Oumarou was elected president of the party by his supporters.
But on Tuesday, September 29, the court rejected this dissident election. And it is thus Hama Amadou who wins the last round of the battle of the chiefs.
But the judicial soap opera continues. As soon as the clerk of the court published the order, Noma Oumarou announced that he wanted to appeal.