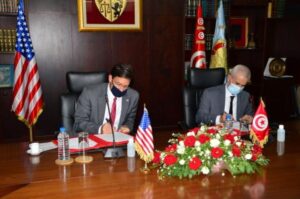 Mark Esper was Wednesday, September 29 in Carthage as part of a tour of the Maghreb. Tunis welcomes the strengthening of already close ties with Washington while its American ally considers it since 2015 as a major non-NATO ally. This visit will have been an opportunity for new commitments.
At the American Military Cemetery in Carthage, Mark Esper saluted the memory of his fellow countrymen who fell in the Second World War. Previously, the U.S. Secretary of Defense signed an agreement for military cooperation for the next ten years. A long-term strategic commitment that consolidates and encourages military cooperation based primarily on the provision of anti-terrorist equipment and military training.
The United States is a strong ally in Tunisia in the fight against terrorist incursions from Algeria and Libya. One of the major fears comes from the southern border where the Libyan conflict threatens to spill over its borders. The threat of regional instability associated with foreign interference on Libyan soil is taken very seriously and intelligence sharing is also on the roadmap for the next decade.
Washington estimates its investment in the Tunisian army since the fall of Ben Ali at one billion dollars. The idea of a U.S. base in the south of the country, which has been mentioned many times, is not on the agenda. American soldiers are now participating in the training of Tunisian soldiers in the fight against terrorism, without, according to both countries, taking part in the fighting. And to the north, an American squadron would have been authorized to exercise on the Tunisian base of Bizerte.
Beyond the region, the Pentagon is looking closely at Russian and Chinese activities on the continent where AFRICOM, the U.S. command for Africa, is increasing cooperation and investment, seeking land to establish or consolidate bases.