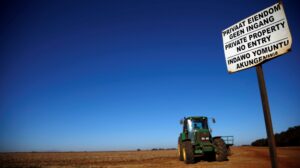 The program is scheduled to start next week, October 15, 2020 and lands that belong to the South African state are to be leased to black farmers. Two objectives: extend agriculture and correct racial inequalities.
In a country where the land is majority owned by whites, yet a minority, President Cyril Ramaposa’s goal is to correct racial inequalities. In total, the equivalent of 896 farms will be leased. Farmland that is either under-utilized or free.
The lease will be for 30 years with the possibility of buying back the land after a few years. One condition: the lessors undertake to use the land for agricultural purposes.
For the government, it is not only a question of redistributing the land to the black majority, but above all of ensuring that this land is used for agriculture. Since the end of apartheid, land reform has been very slow and only 10% of the land redistributed has been used for food production.
Today, agriculture is a priority: last year 40% of people in rural areas lacked food and 60% in urban areas. In addition, two million South Africans have lost their jobs since the beginning of the Covid-19 epidemic.
With this program, the government hopes to tackle several problems at once: inequality, food sufficiency and unemployment. The initiative is welcomed, but there is some skepticism about it.
Economists point out that agriculture requires large investments and that the poorest may not have the financial means to engage in such projects.