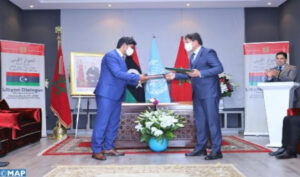 The two rounds of inter-Libyan dialogue, held in Bouznika between the delegations of the High Council of State and the Libyan House of Representatives, helped strengthen trust between the two rival institutions and constitute a “positive” precedent on which they can capitalize, as an approach to move towards a solution to the crisis in the North African country.

At the launch of the Bouznika dialogue, very few were betting on its success, while many others deemed it doomed to failure, said Moroccan Foreign Minister Nasser Bourita at a press conference following a session of the talks. However, thanks to the willingness of both parties, their positive spirit, and the support of the presidents of the two delegations, a major breakthrough has been achieved, he said.

These accomplishments inspire “admiration and pride” in that they demonstrate that members of both delegations have put forward their country’s interest and are looking for solutions, which was instrumental in achieving this progress, he added.

The agreements reached by the two delegations are decisive for the choice of the holders of positions of sovereignty, in accordance with Article 15 of the Skhirat Agreement, he said.

The minister also stressed the need to sustain and preserve the positive momentum created by the inter-Libyan dialogue, which “bodes well,” emphasizing the role of international support and encouragement for these talks from countries as well as regional and international organizations, including the United Nations. The acting special envoy to Libya Stephanie Williams has ensured a permanent follow-up of the sessions and encouraged this dialogue, which she sees as an important turning point in the Libyan issue stalemate.

Bourita stressed that the inter-Libyan dialogue has had a positive echo among Libyans, who saw in it a “glimmer of hope and optimism.”

Addressing the members of the two delegations, Bourita stressed that the instructions of King Mohammed VI have always been clear with regard to the Libyan issue. These Royal Instructions “consist in fully supporting your efforts, standing at your side and mobilizing to make your dialogue a success without interference, influence or pressure, but even more so by protecting this dialogue from any negative interference that undermines its positive spirit”.

He made it clear that Morocco works under the aegis of the United Nations, and considers the Inter-Libyan Dialogue of Bouznika is an integral part of the action led by the UN to advance towards the solution of the crisis.

Bourita further told the members of the two Libyan delegations that “confidence in your patriotic spirit will make it possible to overcome all the difficulties you may face (…) and you are on the verge of finalizing a historic agreement on all the details of Article 15 of the Skhirat Agreement, which we hope will be signed very soon and which will constitute a fundamental basis for unifying the Libyan institutions.”

The important progress achieved has given rise to expectations among Libyans and the international community, especially in this difficult context marked by the Covid-19 crisis and a delicate socio-economic situation from which the Libyan people particularly suffer, he went on, considering that the achievements made open promising horizons for the success of this process, and pave the way for negotiations on other issues to overcome the pitfalls facing the resolution of the crisis.

For his part, head of the delegation of the Libyan House of Representatives Youssef El Akkouri expressed his thanks to Morocco for everything it has presented and continues to present for “peace, harmony, stability and security in Libya,” saying that the Kingdom will always remain a country of generosity to establish peace and unite Libyans.

Chairman of the delegation of the High Council of State, Fawzi Al-Agab, highlighted the key role of the Libyan talks, which have achieved significant progress on the criteria for the selection of sovereign posts.

The heads of the two delegations also expressed their thanks to the United Nations for its efforts to put an end to the crisis in Libya.

A report on the agreements reached in Bouznika will be submitted to the presidents of the High Council of State and the House of Representatives for approval.