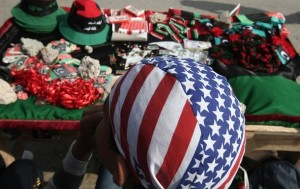 The capture of Al-Libi by US Special Forces in Libya has quickly giving rise to a political feud. The people of Benghazi have called for the kidnapping of American citizens in the country as anti-American campaigns mar the streets and social mediums.
President Zeidan said that they have ask the US “to provide an explanation” as they keep on “following the news of the kidnapping.” He said that the Al-Libi is “innocent until proven guilty” and “no matter what the charges are,” he should be tried in Libya.
John Kerry warned that the US will continue “to do anything in its power that is legal and appropriate” to hold terrorists responsible for their acts through legal processes.
US ambassador in Libya, Deborah Jones, was summoned by Justice Minister Al-Marghani for “a number of explanations” surrounding the issue. Al-Libi is believed to be held abroad the USS San Antonio ship in the Mediterranean Sea and interrogated by the US High Value Detainee Interrogation Group; a multi-security agency unit tasked with interrogating high-value suspects.
Republican senators namely Lindsey Graham, Kelly Ayotte and Saxby Chambliss praised the Obama administration for the arrest. They believe it will be an opportunity to adopt a defense authorization bill which will allow long-term detention and interrogation of terrorism suspects. Chambliss rated the arrest as “the highest-value target” in years which warrants “no mistake” because of the “significant information” they can obtain from him.
Libya’s General National Congress discussed the issue and will soon deliver an official statement.
Supporters of Al-Libi demonstrated in the streets of Libya and are encouraging the kidnapping of Americans as a ransom for the liberty of Al-libi. Warnings have also been issued to those who conspire with foreign forces.