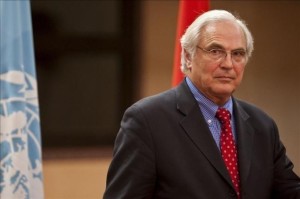 Christopher Ross is back in North Africa as part of his mission to find a final solution between Morocco and the Polisario Front. He will also be engaged in talks with authorities in neighboring countries; Mauritania and Algeria. Algeria’s Foreign Ministry has commented on the matter and reiterated their unconditional support of the Western Saharans and hailed the “intensified efforts” of Ross.
Morocco and Polisario have been at odds over the Western Sahara before finally heading into a war. A UN brokered ceasefire in 1991 brought an end to the arm confrontation. Rabat claims that the territory is an integral part of its territory and has enforced its authority since the Spanish withdrawal in 1975.
Polisario vehemently denies such claims and calls for a UN organized referendum on self-determination to end the territorial dispute. Morocco preferred to accord vast autonomy to the territory but under its sovereignty.
Algeria has been accused of strongly supporting the Polisario Front during the war and continues to pioneer its cause at international level. The spokesman of the Foreign Ministry, Amar Belani, said they are “firmly and categorically committed to the right to self-determination” which they consider to be “a solution that allows Western Saharans to freely determine their future within the framework of a referendum that is fair, transparent and unhindered.”
Christopher Ross has failed to bring Morocco and Polisario for direct talks. Last year, Rabat asked for him to be replaced but to no avail. Belani said Algeria will continue to support the “intensified efforts” of Ross, who serves as the personal envoy of the U.N. secretary general in the territorial dispute.
At the end of Ross’s tour, he is expected to submit a report on October 30th to the Security Council.