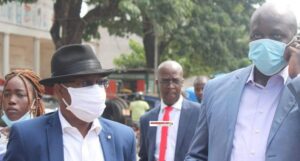 Imprisoned for five days on the premises of the judicial police, the five opposition figures were charged with “harming the fundamental interests of the nation”, placed under a committal order and imprisoned in Conakry’s civil prison.
Abdoulaye Bah, Ousmane Gaoual Diallo and Cellou Baldé, all of the UFDG, the main opposition group in Guinea, as well as Etienne Soropogui of the Movement for Common Values, an active supporter of Cellou Dalein Diallo during the presidential election of October 18, spent their first night in Conakry’s civil prison.
They were brought on Monday 16 November before an examining magistrate of the court of Dixinn, in the close suburb of Conakry, who charged them with “manufacture and possession of weapons of war and harm to the fundamental interests of the nation” and immediately led under good escort to the civil prison. There they joined Ibrahima Chérif Bah, one of the vice-presidents of the UFDG and former governor of the Central Bank of Guinea, who was charged and placed under a committal order last week on the same grounds.
In a statement to the press, the spokesman of the defence lawyers’ collective, Me Salifou Béavogui, explained: “our clients, political prisoners, are in good spirits, very confident that they are convinced of their innocence”, adding that “they are simply being prosecuted for political reasons”.
The prosecutor, for his part, did not wish to speak at the moment. The prosecutor’s office had simply stated last week that these senior opposition leaders were actively sought for making threats likely to disturb public order.