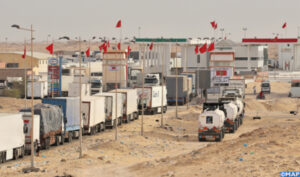 They have also condemned the illegal obstruction by the Algeria-backed separatists of the traffic and trade between Morocco, Mauritania and Sub-Saharan African countries.

The Gambia has welcomed the “peaceful” and “decisive” action taken by Morocco to ensure the free movement of people and goods through the border post of Guerguerat.

In a statement released by its ministry of foreign Affairs, Banjul renewed its recognition of Moroccan sovereignty over its Sahara and backing to Morocco’s efforts and the UN-led process engaged to find a lasting political solution to the Sahara issue.

The Southern African Kingdom of Eswatini has reaffirmed its solidarity with Morocco to defend its sovereignty and restore the free movement of people and goods in the buffer zone of Guerguarat.

Speaker of the National Assembly of Sao Tome & Principe, Delfim Santiago Das Neves, has voiced his country’s solidarity with the North African Kingdom and labeled as “a criminal act” the obstruction of the movement of people and goods in Guerguarat buffer zone in Moroccan Sahara.

For its part, Djibouti expressed full support for Morocco’s action to secure and restore the normal flow of traffic in the crossing point.

In a statement released by its ministry of Foreign Affairs, Djibouti reaffirmed its backing to Morocco’s territorial integrity and condemned all forms of blockade of trade between Morocco and Africa.

Gabon also said it stands firmly with Morocco saying it supports the successful operation carried out by the Moroccan army in Guerguarat to clear the buffer zone from the polisario mercenaries.

In a press release issued by Gabonese Foreign Department, Libreville expressed “its deep concern over the illegal actions” of polisario militias in Guerguarat.

“The provocative acts of the Polisario, which constitute flagrant violations of the agreements and UN Security resolutions, hamper civil and commercial traffic and undermine the cease-fire accord,” said the statement.

For its part, the Union of the Comoros backed the Moroccan intervention to restore the movement of goods and people through the buffer zone of Guerguarat as “legitimate”.

The same stand was voiced by the Central African Republic which welcomed the peaceful action made by the Moroccan army to ensure the free movement of goods and people in the Guerguarat zone.

In a press release, the African country praised Morocco’s attachment to the ceasefire agreement and to a UN-led political solution to the Sahara issue for the security and stability of the region.

The Government of Zambia on its part welcomed the “peaceful and decisive” action taken by Morocco to ensure the free movement of goods and people in the buffer zone of Guerguarat.

“The Government of Zambia fully supports free movement of commercial and civilian traffic in that important corridor,” the Zambian Foreign Ministry said in a statement on Tuesday.

Zambia also reiterated its recognition of the territorial integrity of Morocco, while highlighting the importance of Morocco’s efforts “in bringing about a peaceful and durable solution to the conflict under the aegis of the United Nations as explicitly stated in UN Security Council Resolutions.”

The Somali government said in this connection that it stands with Morocco in all the measures it undertakes to protect its security and sovereignty over its territories at Guergarate border post between Morocco and Mauritania.

The Somali Foreign Ministry also called for protecting the security of citizens and the fluidity of road and commercial traffic.

In the same vein, Guinea-Bissau expressed, on Tuesday, its support for Morocco’s action for a peaceful stabilization in Guerguarat with a view to avoiding confrontation.

The Ministry of Foreign Affairs said in a statement that Guinea-Bissau is following “with great concern the evolution of the security situation in the area of Guerguarat,” while encouraging “Morocco’s action for peaceful stabilization in Guerguarat, with a view to avoiding confrontation while considering the earliest possible return to the path of negotiations for the resolution of the crisis.”

Guinea Bissau renewed support to all international efforts under the aegis of the UN to achieve a political, consensual and lasting solution to the regional conflict.

Several Arab countries, as well as regional organizations have expressed full support for the Kingdom’s “legitimate” intervention to restore the status quo in this buffer zone. They also strongly condemned the illegal and provocative misadventures of the Polisario separatists.