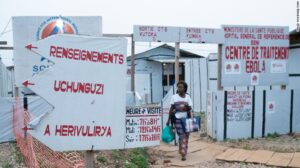 The 11th Ebola epidemic has come to an end according to the Health Minister who announced it on Wednesday 18 November. This epidemic would have lasted five months, it had been contained in the province of Ecuador where it killed 55 people and 130 cases.
The 10th Ebola epidemic had been the deadliest and longest running epidemic in the country, probably due to its politicization with a 66% case-fatality rate. It was not over in the east of the country, as an 11th was declared in the more landlocked Equateur province on 1 June.
It only took 5.5 months to stop this latest epidemic compared to 2 years for the previous one. The Minister of Health explains these good results by bringing the care sites closer to the communities and by a better medical response, particularly with regard to medicines and vaccines.
But this epidemic could have lasted even less time if there had not been other epidemics, including Covid-19, at the same time. Most importantly, the lists of providers to support the response were swollen, delaying their payment for verification and leading to strikes. In September, the response had 4,000 employees for some 120 patients, and a group of ambassadors had denounced, as in the previous epidemic, an “Ebola Business”.
This region, like Greater Ecuador, is in its fifth epidemic. And the government, like its partners, fears a new resurgence, especially as bushmeat can be contaminated and it is difficult to control its consumption in sometimes very remote areas.
The Minister of Health is considering routine vaccination in the areas most at risk: Greater Ecuador, Bandundu and the east of the country. Last year, the WHO (World Health Organization) had prequalified a vaccine. Ervebo, manufactured by the Merck laboratory. But it has never been used on a large scale to date.