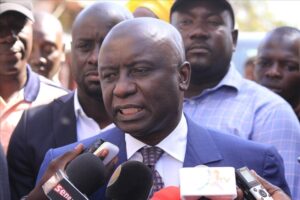 Idrissa Seck took office as head of the Economic, Social and Environmental Council (EESC) on Thursday 19 November at an official ceremony, after being appointed by President Macky Sall on 1 November. The leader of the opposition Rewmi party, who came second in the 2019 presidential election, has become the third personality of the state, joining the presidential majority.

In his inauguration speech, the former opposition figure responded to those who questioned his choice to join the majority by heading the Economic, Social and Environmental Council, a constitutional and consultative institution.

“It is necessary to act for the benefit of the people. The electoral competition of 2019 is behind us, the dispute that arose has been extinguished by the opening of national dialogue and the remarkable results it has produced.’’

He said his talks with Macky Sall covered a set of priority issues. “The first topic the president spoke to me about was youth employment, illegal immigration, and he naturally added recurrent flooding, coastal erosion, and the management of natural resources, especially oil and gas. »