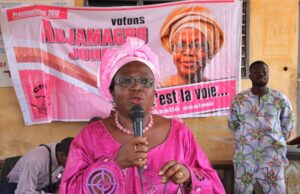 After the arrest of Gerard Djossou, chairman of the Social Affairs Commission in charge of Human Rights within the dynamic Mgr Kpodzro, in incredible conditions in downtown Lomé on Friday evening, the coordinator of the dynamic, Brigitte Kafui Adjamagbo-Johnson, is in the hands of the judicial police since Saturday, November 28.
Since the arrest of Gérard Djossou, Brigitte Kafui Adjamagbo-Johnson had been trying to talk to the authorities. According to the family, she was called at midday, Saturday 28 November, to see her colleague arrested the day before. Around 4 p.m., accompanied by a dozen agents, she was brought back for a search that lasted almost two hours. At no time was she told that she was under arrest. It was when she left the house that her parents heard about her evening meal.
According to the statement made public by the prosecutor, a destabilization plan has been in preparation within the Mgr Kpodzro dynamic for some time, to achieve internal state security. Searches at the home of Gérard Djossou led to the discovery and seizure of compromising documents. The investigation revealed that Brigitte Kafui Adjamagbo-Johnson Kafui Adjamagbo-Johnson was in possession of other documents related to the destabilization plan, adds the prosecutor’s statement, his arrest was made necessary Saturday.
The dynamic Mgr Kpodzro, who continues to proclaim the victory of the presidential election of February 22nd won by Faure Gnassingbé, was planning a demonstration this Saturday. This did not take place because the authorities banned it at the beginning of the week.